So I’ve been really really lazy on the blog front this year.

January has been and gone, and now it’s almost the end of February and I find that I still haven’t got round to writing anything. I promise to rectify this from now.

Where has the time gone?

Not only do weeks seem to fly but I realised that last month I’d been living in London for two years. Two years which has flown by in a blink!

Recently, I’ve been having loads of conversations with my friends now (gasp) 30 is approaching at a rather hideous rate, where did the last decade go?

I was thinking about this when I watched a video on TED by a guy called Cesar Kuriyama watch it here – who has decided to film one second every day to create one long documentary of his life.

As I was watching this I just thought, how awesome. Just imagine being able to put on a movie in your old age and remember every day from your whole life..

There are so many tiny, beautiful, funny, tragic moments in your life, but its impossible to remember them all. I personally can barely remember what I did last weekend unless someone prompts me.

Watching the film as an outsider is on the one hand, little more than an interesting montage of randomness but at the same time its also an endearing insight into this persons life.. Birthdays, trips, drinking sessions, quiet moments, food. The most moving part of Kuriyama’s film so far is taken when his sister in law is taken seriously ill in hospital. This quiet footage of a family, hoping and waiting, is perhaps a time which you would think you wouldn’t want to remember but the artist says that by filming each day it helped to process and dealt with what was happening.

Kuriyama says that although there are days when narrowing your choice down to one moment is difficult – in the process of choosing, it makes the other moments connect with that second.

Now I’m no documentary film maker. I don’t even know how to begin editing a movie. But the end result is such an intriguing concept that it makes me want to give it a go, something which Kuriyama encourages more people to do – creating a global montage of lifetimes.

What I like about this idea is that it makes you view your life slightly differently, as the audience. And it makes you want to step out of the mundane in order to create a more interesting second.

When I was talking to someone about this they suggested that this was building a fake experience because you wouldn’t have done it without the need to film it. But I think that anything which makes you leave of the daily grind and forces you to have a new experience… Surely that can only be a good thing!?

And so what if you get flu and are in bed for two weeks, isn’t that representative of how life is? The ecstasy and the ordinary pretty much in equal quantities.

Now, don’t get me wrong, this is not a documentary you’re going to want to invite your mates over to watch with some beers and a bowl of popcorn. But what an awesome project to have for yourself.

It’d be like the ultimate 21st Century memory box.

If I think about how much my life is going to change even in five years it’s pretty extreme. I’m suddenly getting to the age where my friends are getting married settling down. It pains me to say it but eventually my party days will be numbered (or at least dramatically lessened) why not capture the transition?

And so. I’m going to try it.So far I have done 4 days, and it’s not been easy

to remember to capture the moment. But I’m liking the process and I’m sure that it will become more habitual as time goes on. It definitely makes me want to try and live each day in the most interesting way I can.

So, what do you think? A interesting way to capture your memories or perhaps a tedious waste of time?

Go check out the video yourself and tell me what you reckon. I found that it divides people.

Probably too late to say that but I was only just unfurling from my festive cocoon of loveliness which I created with red wine, too many chocolates and Christmas movies under the duvet – when I had an incident with my foot and a door frame resulting in a bang, crash, whallop and a bit of breakage – so I’ve been forced to keep a low profile for a while until I’m mended.

Good news though, the world didn’t end! (I wish I’d been a fly on the wall of those nutters who had hoarded all that food into their basements. awkward.)

So now comes the timely month of setting resolutions…

Let’s be honest, at this time of year who doesn’t want to be a little bit fitter and a little bit less…squishy. But I’m going to try and make my resolutions things I’d like to do more of, not less. And let’s get one thing straight, I can’t give up booze for January, the month is depressing enough as it is without adding to the gloom by banning G&Ts!

I turned 28 last week (another reason for not giving up cake or alcohol in January) one more year past the time I really should have got my sh*t together…in all seriousness though, I’m pretty happy with how far I’ve come in my pink-banana-shoes.

The year 2012 saw me learn…. how to blog! (kinda) how to meditate (in theory anyway), participate in laughter yoga (what a hoot) dance in a drum circle (awesome) go to several lectures (informative) swing dance (more to come)  bake (occasionally).. And let’s not forget the tribal gathering!! (um…no words) And in the process I’ve met a whole community of people just trying to make a little price of happiness for themselves (even if it is in a bonkers way.)

And if someone asked me the question – Are you happier? Then I think I could say yes.

So where do I go from here? …well, I’m excited about 2013 –  I feel that last year I took the giant leap changing my life. (For those just joining us, read this) and now I just need to get the details right. Easy!? Although if anyone knows how I can get paid to be an adventurer then let me know… doesn’t anyone need anything exploring anymore?!.. (and Space doesn’t count. You’re not going to get me in a Spaceship thanks  Mr. Brandson. I’m veto-ing anywhere that is void of oxygen.)

And so unless there’s an urgent call for (Earth bound) explorers I’ve just got to stick it out here. And so I’m still determined to put myself out there when it comes to more weird and wonderful stuff about London town. I’m still planning on researching positive thinking, maybe find a yogi, maybe take up extreme knitting!… Who knows. This city still has a host of adventures I’m going to embark upon. As always, suggestions are most welcome. (Although I still refuse to go and see the women who – ‘channels the spirit of Benjamin’ Seriously, I get almost weekly invites. And the answer will always be no.)

ent ever)  Seriously, the best way to release your inner-child since climbing trees.

well, if hula hooping fame doesn’t come off then I guess there are always other forms of exercise. I dragged my sorry bum to the gym the weekend before ‘door- frame gate’ (it was the first time since …the beginning of Dec, ok, the last time was in November but come on, no sane person wants to hit the treadmill in Dec over a glass of mulled wine do they!?)

Anyway, I almost vomited all over my toned-tough-talking instructor as I did my 17,000th lunge. So, like virtually every other person I know, I’d like to kick my bum into some sort of peachier shape. Off to a lecture next week.. I  should say hobbling to a lecture on one gammy leg… led by two (probably sick makingly fit, gorgeous and smug) female personal trainers. I’ll bring back some tips.

Even if I’m not going to be an Olympian maybe I can learn some spatial awareness. Damn you door frame.

Tell me what your new year resolutions are, or are you against them?

P.S Thanks to Evoling Yogi for the blog award nomination – I’ll get round to writing about it soon. xx 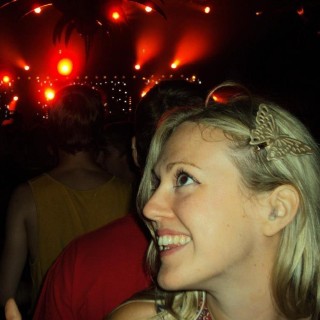 One modern girl's adventure to happiness...and blogging about it. Out there to meet new people and try new experiences in and around London in the pursuit of happiness. Come visit me on https://pinkbananashoes.wordpress.com

The Happy Startup School – A better way to build a startup

We help you turn your startup idea into a happy, thriving business

a journey filled with fashion,fitness&fun

Be Beautiful and Dance.
Volunteer For A Cause

Helping the World One Cause At A Time

Everyday, Everywhere We Are Guided Towards Happiness

The Incredible Lightness of Seeing